Polycyclic aromatic hydrocarbons (PAHs) are one of the most ubiquitous organic molecules in the universe that can be found in meteorites. Two-color resonant two-photon ionization (2C-R2PI) mass spectrometry was used to discriminate between isomers of PAHs in Murchison meteorite. It is hard to differentiate structural PAH isomers by mass spectrometry. Electron ionization mass spectra of isomeric PAHs are virtually identical. However, wavelength dependent resonant two-phone ionization (R2PI) spectra differ for specific isomers. To capitalize on this property for isomer selectivity, laser mass spectrometry with supersonic jet expansion was coupled with resonant ionization. Since only a few rovibronic states of the entrained molecule are populated, sharp R2PI spectra can be obtained. Isomers can be selected by careful choice of excitation and ionization wavelength. The first photon from tunable dye laser excites the molecule to an electronic excited state, and a second photon from another tunable dye laser ionizes the molecule of interest. These concepts were applied to produce sharp two-color R2PI spectra of chrysene & triphenylene from a complex meteorite sample. Both chrysene & triphenylene were found in sublimates from carbonaceous residue obtained by acid demineralization of the Murchison meteorite. This study was collaborated with NASA.

Interstellar carbon can be found in the form of polycyclic aromatic hydrocarbons (PAHs). This experiment was to investigate low-temperature chemical pathways between gaseous and solid phases in order to better understand the evolution of cosmic carbon. Cosmic dust analogs  were used to evaluate the effect of precursor structure on the molecular complexity of the resulting grains. The seeded jet was exposed to an electrical discharge through a pulsed discharge nozzle (PDN), and the grains were collected and probed ex site via laser desorption jet-cooled mass spectrometry (LDJCMS) from the de Vries lab at the University of California Santa Barbara (UCSB). The laser desorption mass spectra of the solid grains for all precursors revealed a rich molecular complexity, where the precursor has been either fully or partially fragmented in favor of growth into larger molecules.  Comparison to mass spectra from the Murchison meteorite revealed the large relative abundance of a peak at 202 m/z, likely corresponding to pyrene and/or its isomers. Pyrene isomers include stable PAHs resulting from the progressive addition of functional groups to smaller hydrocarbons. To explore the effect of PAH structure on the molecular growth within grains, C14H10 Isomers, anthracene and phenanthrene were used. These were prototype of linear and catalog-condensed polycyclic benzenoids respectively. While the grain formation yield was much greater for the anthracene , the molecular diversity within the grains as very similar for both. evidence of the methyl-addition-cycle action mechanism (Methyl addiction/cyclization) was observed in the anthracene experiment. PAH growth at low temperatures via barrier less routes involving the addition of alkyl- and phenyl-type radicals was suggested as a viable pathway to complex organic molecules  (COMs). This study was collaborated with NASA Ames Research Center. 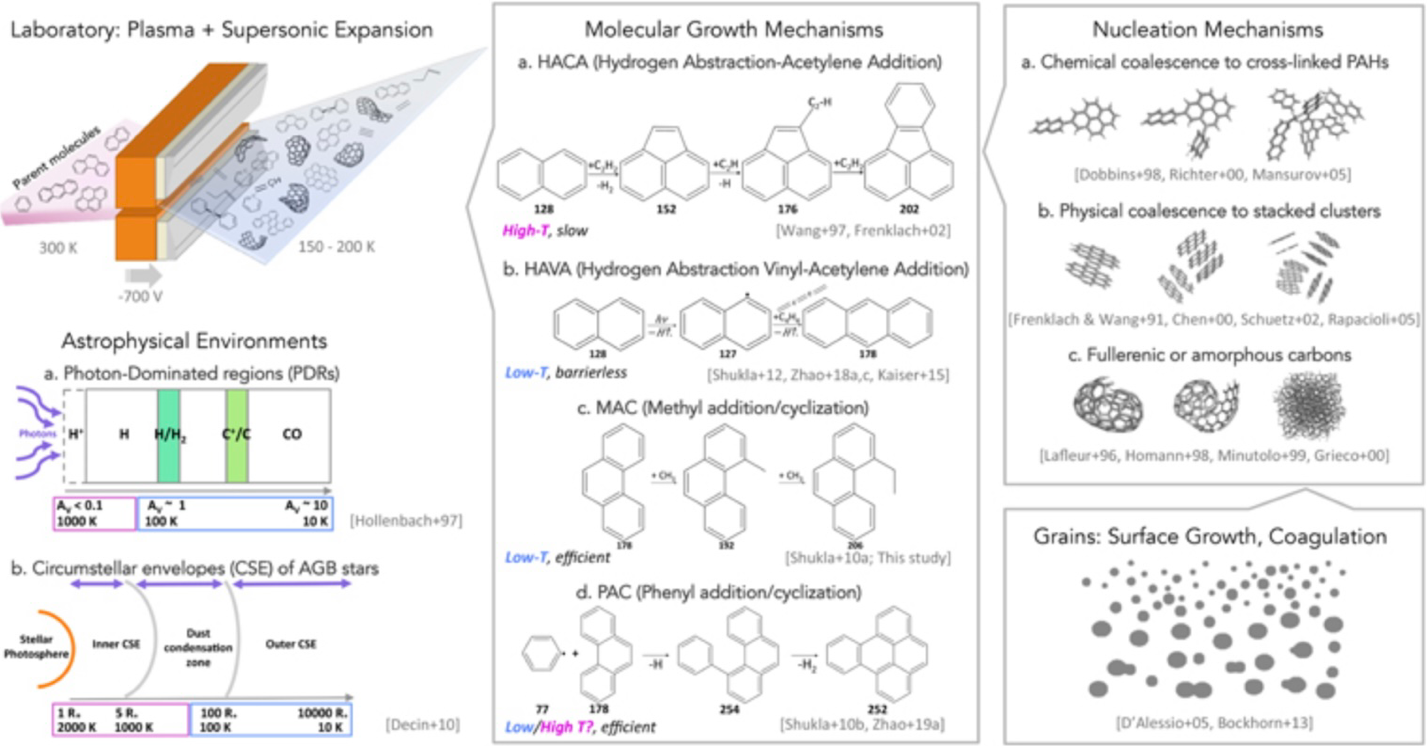